Coming Through Slaughter - The Bolden Legend 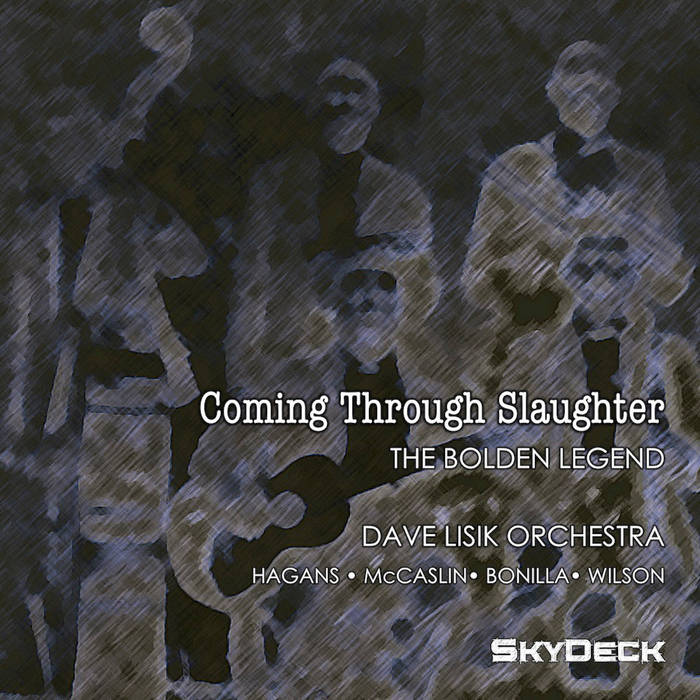 How does the contemporary jazz artist with a modern voice, modern ideas, and modern underpinnings – an artist most comfortable on the cusp of the new – approach the musical interpretation of a period subject with all the attendant pitfalls of attempting to recreate and evoke a bygone era that almost literally has faded into a tissue of the past? That was the creative conundrum faced by Canadian composer Dave Lisik when he read the thoroughly au courant novelist Michael Ondaatje’s reimagining of the life of Buddy Bolden, the New Orleans cornetist credited as the founding father and haunting spirit of American jazz. Lisik was inspired both by the vision of Bolden blaring his signature B-flat improvisational cornet solos into the golden dawns of New Orleans’ Storyville district and the verve and brilliance of Ondaatje’s careening narrative.

So, how to resolve an artistic dilemma?

Knowing full well the impossibility of doing a musical archeological dig and replicating the sound of Buddy Bolden and his band – impossible because no recordings of the man exist – Lisik chose to let the novel and its many moods and hues and voices, and the compelling portrait of Bolden that emerges from the scant facts that are documented, serve as his creative roadmap. From the opening drum signature – featuring engagingly inventive percussion by Matt Wilson – to the stabbing horn choruses suggestive of the urban chaos of Storyville circa 1900, we know we are hearing a composer and musicians rooted in the now reflecting on the then.

Composer Dave Lisik, himself a trumpeter of no small repute, has assembled a Murderers’ Row of jazz stalwarts for this ambitious project: the redoubtable Tim Hagans on trumpet, Donny McCaslin on tenor and soprano saxophones, trombonist Luis Bonilla, lead trumpeter Joey Tartell, Matt Wilson on drums, and a score of other indelible talents. The result is a Creole-flavored jazz stew in theme and inspiration, yet a thoroughly updated urban chorus of voicings in execution.

It’s obvious from the beginning seconds of this recording that Dave Lisik is in full command of his concept of recreating the tone of the novel Coming Through Slaughter, with his musical themes front and center, his musical accomplices fully sharing and enjoining his vision. Coming Through Slaughter marks the promise of a young, up-and-coming innovator who has set his sights and ambitions very high indeed. What is remarkable is that composer Dave Lisik not only succeeds, but succeeds with authority. Listening to Coming Through Slaughter creates excitement on two levels: one, because it is such an inspiring accomplishment of virtuosity and mood on many creative levels, and, second, because after this project we know we will be hearing from Lisik again.

I. COMING THROUGH SLAUGHTER
“His geography... a mile or so from the streets made marble by jazz.”

This opening track is obviously meant as an overview of the novel and as such features a panoply of moods and voicings that recreate musically the book’s many themes. Beginning with an ear-pleasing cymbal wash by drummer Matt Wilson followed by a startling thunder of horns, the lead-in is strongly suggestive of the urban hustle of the streets of New Orleans, a sprawl of locomoting humans going about their daily business. Out of the controlled chaos of horns comes a singular saxophonic voice, shouting, idiosyncratic, demanding to be heard, preparing the listener for the musical introduction of Buddy Bolden played by trumpeter Tim Hagans. Lisik alternates these sounds of the city with the individual voice, first with saxophone, then an aching interlude from Amy Rempel on piano. The track finishes with an at times exuberant, at times mournful and foreboding, end theme with full instrumental chorus intercut with a spiraling saxophone and trumpet duet. It is an exemplary workout from the two soloists and an adept composition for setting the novel’s mood and feel.

II. CRICKET NOISES AND CRICKET MUSIC
“For this is what we are when watched by people bigger than us.”

In Michael Ondaatje’s retelling, The Cricket was a gossip sheet written and printed by Buddy Bolden that collected all the scandal, whispers, and violence of the French Quarter, an obsessive rumination on the streets and the horrors of everyday life. Bolden, in his fevered and manic way, dealt with news of death and his nightmares of children dying by laboring over them in his own newspaper. Correspondingly, this track has an introspective take, Bolden turning inward and facing his demons. The piano work of Amy Rempel is particularly evocative of the meditative side of Buddy Bolden and is well supported by Jeremy Allen’s undergirding on bass and cymbal splashes by Matt Wilson. The melancholy is interrupted by adrenaline bursts of saxophone from Donny McCaslin and a Petrushka-like fanfare of horns, all suggestive of the sudden, frightening mood swings of Bolden, an artist standing on the edge of a mental abyss.

III. THE DRAWINGS OF AUDUBON
“Which seemed to lean over the water, its eyes closed, with thoughts of self-destruction.”

Writer Kenneth Tynan once described the sound of Miles Davis as a man playing alone on an ice floe. This track, a showcase for soloist Tim Hagans, has a similar ice floe feel, a mood of disembodiment, alienation, the disturbed mind of Buddy Bolden trying to find a foothold in his world. Inspired by the novel’s depiction of Bolden’s alcoholic and aging mother-in-law who in especially drunken moments would pull out drawings of John James Audubon’s birds for eccentric discussion, the track begins almost wistfully, a slight tipsiness to the saxophone accents, which almost seem to veer into an off-kilter looniness, reminiscent of the portrayal of the character Mrs. Bass and her “damned birds.” The voice of Hagans’ flugelhorn takes over, insinuating the still somber, still agitated state of Buddy Bolden as he drinks through the night.

IV. WHISTLING IN THE WAY OF BOLDEN
“Ecstacy before death.”

Digressing from a focus on specific passages from the book, this track “Whistling In the Way of Bolden” can be both literal, Bolden whistling, and metaphoric, Bolden euphoric in manic overdrive, the man about town, the favored musician of the Quarter’s nightcrawling denizens, a barber in the daytime regaling customers with his wild flights of fancy. Beginning in an almost lighthearted vein of simplicity, composer Lisik adds more and more musical elements, complicating the mood, ratcheting up an increasingly disturbing contrapuntal cacophony until a surprising endnote, when alternating horn lines become more and more voicelike, creating an eerie dialogue of deliberately unmusical flutings, coughs, groans – ecstacy before death.

V. AUDITORIUM OF ENEMIES
“The music was his dance.”

Inspired by a line in the book, “The music was his dance in the auditorium of enemies,” describing a turn-of-the-century New Orleans pianist by the name of Jaelin Brewitt, this track begins as a showcase for percussionist Joe Galvin who stirs up an African-inflected jungle-current of rhythm that dissolves into a spiraling, mournful dirge of horns. Muted trumpets, like angry insects, nag at the seams of the music, framed by a driving rain of cymbals. The theme is chameleon-like, ever-changing, particularly during Luis Bonilla’s trombone solo, emerging from the soli, delivering the flavors of chaos of a New Orleans of long ago and the disorderly lives of the artists who haunt the city’s memories.

VI. THE HORROR OF NOISE
“Then he falls, dissolving out of his pose.”

The legendary photographer of the Storyville red-light district, E. J. Bellocq, is a character in Ondaatje’s novel who barely survives a fire described as a “horror of noise.” Taking its cue from those words, this movement begins with a strangling of saxophones and Hagans’ trumpet, disjointed, raging, cascading notes that wind their way into a post-bebop inflected development and a later interregnum of seemingly disembodied voicings from soloists Tim Hagans, Art Edmaiston, Tom Link, and Dustin Laurenzi.

VII. SUICIDE OF THE HANDS
“After his child died in his dream.”

The musical expression of human voices is a motif that runs through Coming Through Slaughter. It’s likely the composer imagined the staccato bursts of dialogue between Buddy Bolden, his wife, and other characters chattering, arguing, cajoling, screaming into the edge of night. This track, featuring the dueling, telepathic horns of soloists Bonilla and McCaslin, is suggestive of the alcohol-fueled banter of Bolden and those who dared come near his creative flame. Emboldened by a two-note ostinato and several short thematic devices, the voices become a chorus of wails, an agony to a man who begins to regard his own hands and fingers with paranoia and suspicion.

VIII. IN EXILE
“Something about the way the man who carries his profession with him always.”

Inspired by the above line in the novel, Lisik here projects onto the narrative his idea of Bolden as the consummate jazzman, carrying his cornet mouthpiece with him everywhere he went, swallowed up by his music until it drove him to madness. Beginning with twining melodic patterns on piano and flugelhorns, the mood is interrupted by an almost martial theme in the lower instruments that collides ominously with the soloists.

IX. THE PARADE
“So in the public parade he went mad into silence.”

Buddy Bolden’s final notes according to Ondaatje’s fictionalized account were in 1907 during a parade when he simply stopped playing and walked off with no explanation. Shortly thereafter he was taken away to a mental asylum where he lived the rest of his life out of the public eye and memory. It’s a testament to Lisik’s skills that in this track and others the listener is able to differentiate between the voices in Buddy Bolden’s head – schizophrenia perhaps? – and his imaginings of Bolden’s spoken conversation. This complex track in two distinct sections suggests a Bolden hearing beguiling, commanding voices in his head, although he tries to overcome them by immersing himself in the joy of a parade, also well-represented musically by an avant-garde New Orleans street reverie. But the voices refuse to submit to his will and grow louder and fiercer until Bolden can only obey.

X. Epilogue: BLEACH OUT TO GREY
“... he dropped the negative into the acid tray and watched it...”

One faded, ensemble photograph exists of Buddy Bolden. Of the six men pictured in his band, only Bolden is smiling, a smile seemingly innocent and carefree until we're given a reminder of the bedeviled mind behind it. In the novel, E. J. Bellocq was the lensman behind the photograph and later makes a few safety prints before dissolving the negative in an acid bath. The bleaching to grey of the negative is what inspired the final track here. A solitary trumpet, pleading, playing into the void, evokes fading voices, fading memories, and music that has faded into the greyness of time.

Bandcamp Daily  your guide to the world of Bandcamp