Walkabout - A Place for Visions 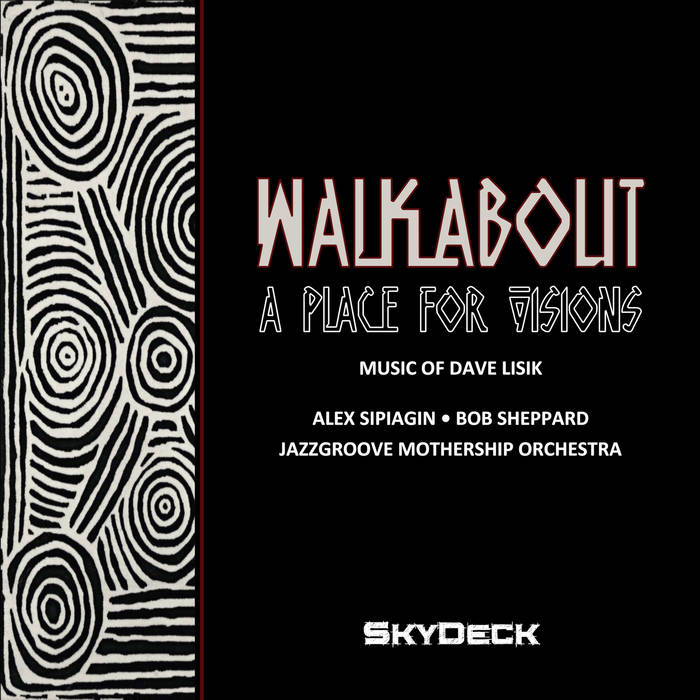 This recording is dedicated to the memories of one of my most important teachers and one of my favorite students. Pamela Currie, from my days teaching high school music in Winnipeg, Canada, was certainly a one of a kind human being and will be missed by many. Gary Pollard, from my days as a high school music student, leaves a substantial legacy of countless students he influenced, and a wonderful family. Without his influence, my life wouldn’t look anything like this. Thank you.

For me, this past year has been an almost constant reminder that our own personal journeys are never complete, always complicated, and often out of our immediate control.

Nominated as Australian Jazz Ensemble of the Year 2006, 2007 & 2009, The Jazzgroove Mothership Orchestra is widely acknowledged as Australia’s leading full size jazz orchestra. Musically this ensemble represents many of the finest young improvisers Australia has to offer, and features original music from Australia’s most dynamic and creative large ensemble composers all packaged into one exciting super-ensemble. Since 2006 the orchestra has collaborated with international artists, Jim McNeely (US), Alex Sipiagin/Bob Sheppard (US), Dave Lisik (Can/NZ), Bert Joris (Belgium), Jazz Legend Charles Tolliver (USA), Florian Ross (GER), Will Vinson (US/UK), Quinsin Nachoff/Darren Sigsmund (CAN), Ed Partyka (US/GER), John Hollenbeck (USA) & Kristin Berardi (AUS) with the assistance of the Australia Council and the support of Australia’s major jazz festivals. The music of the mothership can best be defined as exciting, dynamic and highly original with most of its youthful members (average age 29) being drawn from one of the world’s most innovative musician’s collective’s, Sydney’s Jazzgroove Association. The Orchestra has released three critically acclaimed CD’s ‘The Mothership plays the music of Mike Nock’ (2005), ‘Dream Wheel’ (2007) and "Kristin Berardi meets the Jazzgroove Mothership Orchestra (2011) and as individuals it’s members have released over 30 CD’s as bandleaders.

Alex Sipiagin was born on June 11, 1967 in Yaroslavl, Russia, a provincial city 150 miles from Moscow known for being home to one of Russia’s most famous opera singers, Leonid Sobinov, also Alex’s great-grand uncle. At 12 years of age, he began playing in a children's orchestra, studying under the great symphonic trumpeter and teacher, Mikhael Tsamaiev, his first inspiration. It was shortly after entering a local musical college at age 15 that Sipiagin was introduced to and inspired by what few and rare taped recordings were available in Russia of bebop and other jazz music. He knew he had to go to Moscow for a chance to learn more, and at 16 auditioned for the Moscow Music Institute, where he beat out 50 other students to get in. There he combined his classical studies with explorations into jazz. At 19 and after receiving his Baccalaureate, Sipiagin served the mandatory 2 years in the Russian army and then, upon release, continued his classical training and music studies at the Gnessin Conservatory in Moscow, earning tuition on pop gigs and recording sessions. In 1990, Alex won first place in a Russian young jazz players’ competition in Rostov City. That same year, with "Glasnost" in fully sway, he visited the United States for the first time, performing with a Russian student jazz band, Green Wave, when they were asked to headline the Corpus Christi Jazz Festival in Texas. He caught the attention and ears of many, and was invited to participate in the International Louis Armstrong Competition sponsored by the Thelonius Monk Institute in Washington D.C. Other trumpeters competing were those who would later become today's prominent players such as Ryan Kaiser, Scott Wendtholt, Nicolas Payton, and others. Alex placed 4th in the competition, and was presented a Bach trumpet by the legendary Clark Terry, the trumpet which he still plays to this day. Following a challenging year, in 1991 Alex decided to pursue jazz to the next level and moved to New York City. He sat in on jam sessions until he snagged his first jazz gig in 1992, playing every Monday night at Sweet Basil with the Gil Evans Band directed by Miles Evans. Then in 1993 he became a member of Gil Goldstein’s Zebra Coast Orchestra, which replaced the Gil Evan’s Band slot on Monday nights at Sweet Basil. In 1994, Sipiagin became a regular member of the George Gruntz Concert Jazz Band while performing also with drummer Bob Moses’ band, Mozamba. Trumpeters Earl Gardner and Randy Brecker introduced Sipiagin to become a member of the Mingus Big Band in 1995, of which he is still a regular member, as well as the Mingus Dynasty and Mingus Orchestra. Since 2000, Dave Holland invited him to be a regular member of his big band and currently with his various small groups, and in 2003 he recorded with Michael Brecker’s Quindectet, which he has heavily toured with alongside Michael Brecker’s Sextet. Alex has also performed with Eric Clapton, Dr. John, Aaron Neville, Gonzalo Rubalcaba, Kenny Werner, Elvis Costello, Michael Franks, Dave Sanborn, Deborah Cox, legendary producer Phil Ramone, etc. and many of the recordings he has been involved in has won Grammy's. As a soloist, Sipiagin has 13 recordings out to his credit, mostly with the Criss Cross Jazz label, as well as with ArtistShare and Sunnyside Records, and has toured extensively throughout Europe, Asia and Russia with his group. This year, he is proud to announce his new association with Gonzalo Rubalcaba's record label, 5 Passions, which he will be recording for and releasing in 2013. Since 2007, Sipiagin steadily teaches as part of a special jazz program called "New York Comes to Groningen" at the Prins Claus Conservatorium in Groningen, The Netherlands. He also gives clinics at various music institutions around the world. Today, Sipiagin lives in the North Fork of Long Island with his family, and continues to perform and tour with the Dave Holland groups, Mingus groups (and various others), as well as with his own solo projects worldwide. Sipiagin chooses to play Yamaha instruments and is a Yamaha U.S. artist since 2010.

Over the course of an extraordinarily diverse career that has made him a first call musician in the realms of jazz, pop and the studio worlds, multi-woodwind specialist Bob Sheppard has always let his array of saxophones, flutes and clarinets do the talking. Superstar names highlight his resume, and jazz critics have been raving about him as both a sideman and leader for years, but such praise is simply a byproduct of Sheppard´s years of steady work and dedication to his craft - a tradition that continues on Close Your Eyes, his latest release as an artist and is the debut CD for the BFM Jazz label. Sheppard has been a steadfast member of the Billy Childs Ensembles and the Peter Erskine trio for over a decade. Additionally over the years, he has toured with Steely Dan and Boz Scaggs, and brought his diverse talents to more recent performances with James Taylor, Natalie Cole and Queen Latifah and most notably with the legendary Joni Mitchell on her current four-disc set and her 2007 Grammy-winning, Shine. He also played on a live studio video with Mitchell and Herbie Hancock. Other distinguished collaborations include eight years with Freddie Hubbard, and tours and performances with Chick Corea´s ensemble Origin, Mike Stern, Randy Brecker, Horace Silver, Lyle Mays, Nat Adderly and Toshiko Akiyoshi/Tabackin Big Band. Some of his more significant recording credits include Scott Henderson, John Beasley, Mark Isham, Otmaro Ruiz, Bill Cunliffe, vocalist Kurt Elling, Marilyn Scott, Michael Franks and Diane Reeves, while including pop icons Steely Dan, Rickie Lee Jones, Rod Stewart, Randy Newman and Stevie Wonder. As part of America´s newest past time you can occasionally catch Sheppard soloing on the hit TV show American Idol. Bob Sheppard has honed his intuitive personal style through collaborations with this remarkable range of artists as well as playing on over a hundred movie and television soundtracks. Having earned his Master´s from the Eastman School of Music, Sheppard draws upon his diverse musical background delivering musical intellect, commanding technique with a warm inviting sound to every performance. As a passionate music educator, Sheppard is a part-time faculty member at the USC Thorton School of Music, and frequently a guest clinician at colleges around the country.

Credits:
Recorded August 25-26, 2011 by Stewart Long and Dave Lisik at Studios 301, Sydney, Australia.
Engineering assistance by Simon Todkill
Edited and Mixed by Dave Lisik in Wellington, New Zealand. Mixing assistance by Ryan Brake
Mastered by Steve Garden at the Garden Shed, Auckland, New Zealand
Produced by Dave Lisik and David Theak
Photos by Brian Stewart
All music composed by Dave Lisik (Galloping Cow Music, ASCAP)
All compositions on this recording are available by contacting the composer at: davelisik.com
Movements and other work are available through UNC Jazz Press and skydeckmusic.com

This recording was made possible through the contributions of Victoria University of Wellington, New Zealand and Neil Quigley; the University of Sydney (Sydney Conservatorium), and the New Zealand School of Music, Wellington.
Thanks very much to my friend David Theak and all of the musicians of the remarkable Jazzgroove Mothership Orchestra for their tremendous efforts and contributions; to Mike Nock for the introductions; Neil Quigley for his great support and encouragement and to Victoria University of Wellington; Rodger Fox; The New Zealand School of Music; Natalie Honey; University of Northern Colorado Jazz Press; Jack Cooper, Jim Richens, Bob Washut, Chris Merz, Ron Paley, Gary Pollard, Mark Waldera, Dave Monette, and Lorne and Susan Lisik.

Bandcamp Daily  your guide to the world of Bandcamp